Many well-meaning tennis coaches and former touring pros tell you to “snap your wrist” for power on the serve. Unfortunately, tennis researchers have known this is false for decades, but recreational players haven’t been given this information.

If you want to hit your tennis serve faster, you must generate power from the legs up, with most racket head speed coming from internal shoulder rotation. How the heck do you rotate your shoulder internally? Basically, you “throw” your hip forward before your arm starts moving forward, and this pulls your shoulders and arms forward very quickly. 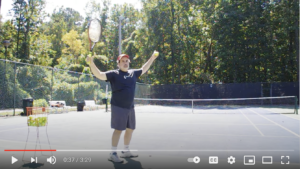 The ball toss can make or break your tennis serve.

It’s Mostly in the Toss

During the past 10 years, I’ve helped countless players get big serves without ever touching their mechanics. I simply fixed their toss and they add 10, 20 or 30 mph to their serves.

More than anything else, your toss will determine whether or not you can create and maintain maximal racket head speed during a serve. Tossing the ball too low, behind you or too far to one side will slow your racket before you make contact.

Toss the ball approximately six inches higher than your outstretched racket so you can fully extend your arm into your serve and get maximum racket speed. Despite the seeming paradox, you want to try to hit the bottom or back of the tennis ball upward, rather than hitting the top of the ball down, for maximal speed. This will create spin that brings the ball down. (Note: Tennis researcher Vic Braden recommends tossing the ball no higher than the tip of your racket if you have a more sidearm serve.)

Check out this video from the U.S. High School Tennis Association for a quick tip on improving a “frying pan” serve.

Toss the ball even with or slightly outside of your hitting shoulder. Tossing too far to the left, if you are a right-handed server, will cause your racket to come across your body, instead of straight to your target.

Toss the ball one to two feet in front of you. If you toss the ball behind you, you will not be able to use your legs and hips to generate the maximum power you want. Your weight should be falling into the court after you serve, not backward.

Toss several balls just as you would if you were serving and let them land. If the balls land behind the baseline, or the to the left of your serving shoulder, practice tossing more forward and to the right.

Stand on a 45-degree angle to your target to create a swing path that will bring the most muscles into play during the serve. Standing straight on will not allow you to rotate your hips into the serve and create the internal shoulder rotation that Australian tennis researcher Dr. Bruce Elliot says contributes the most racket head speed at impact.

Bend your knees downward prior to jumping off the ground as you serve. Your front foot should cross the baseline before your back foot ito create the momentum that contributes to maximum racket head speed.

Throw your hip toward the net to start your forward swing in order to create internal shoulder rotation. Your shoulder should drive the arm forward; the arm should not carry the shoulder into the shot.

This is where coaches and former touring pros are confused. If you turn your hand outward (like a high-five) at the end of the service motion, you’ll see lots more speed on your serve. This motion doesn’t create the speed, however. It simply prevents your racket from slowig before you hit the ball. The racket-head speed was already generated long before you “snapped your wrist.”

To get this motion, turn your hand outward to finish the serve. At the end of your serve, the thumb on your serving hand should be facing toward the ground. This pronation of the forearm allows you to slow the racket down after the serve–if you do not do this, you will begin decelerating before you make contact in order to stop. The initial forearm movement is like a “high five” or holding your palm next to your ear, then reaching upward and turning your palm the opposite way.

Be careful not to snap your wrist as the main part of the serve. It should be a natural motion that happens as you get close to the ball and after you have made contact. Snapping your wrist to get power can lead to decreased used of the legs, trunk and shoulder and cause a repetitive stress injury in your arm.